You are here: > GPs appeal for return of medical equipment during city-wide amnesty

GPs appeal for return of medical equipment during city-wide amnesty 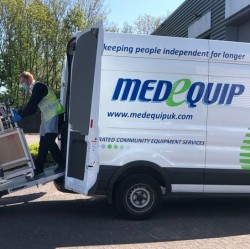 GP surgeries in the city of York are encouraging patients to return medical equipment that they no longer use as part of an amnesty.

The scheme, which is running during York Environment Week, begins on Monday 20 September and will allow patients to return items to their local practice with no questions asked.

Each year, unreturned equipment, which includes crutches and commodes, costs local NHS services £500,000. By returning items to GP surgeries, York residents can play a role in reducing this cost and ensure that other patients get the equipment they need.

All items that are returned will be collected at the end of the week by Be Independent or Medequip. Once collected, items will be thoroughly cleaned before being given to the next patient, and in some instances will be repaired and refurbished.

Dr Rumina Önaç, a GP at Old School Medical Practice who pioneered the scheme, said: "It's a really great opportunity for patients to support their local NHS by returning community medical equipment they no longer use. A lot of items, such as crutches and walking sticks, never make their way back, when in fact they could be reused by someone else.

"By returning items, either during the amnesty or after, you can help us safely recycle equipment, ensuring that we support patients who need it."

The amnesty scheme in GP surgeries will run until Friday 24 September, but patients can still return equipment after this date.

Patients can arrange for the free collection of equipment loaned by Be Independent by calling 01904 645000 or by emailing be.independent@york.gov.uk.

Items loaned by Medequip can be returned for free by calling 01423 226240 or by emailing north.yorks@medequip-uk.com.