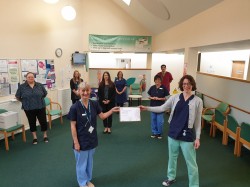 Nominations for the awards were submitted by Medicine and Physician Associate students in recognition of the exceptional medical education and support they have received over the last twelve months.

The Team Excellence award is given to NHS teams or groups of staff who, during clinical placements, have taught or supported students, helped or inspired them or gone that extra mile to ensure they have a positive and fulfilling experience and worked well as a team.

Some of the students’ nomination comments included: ‘Such a brilliant place to have had my GP placement’ and ‘The team spirit is evident and enhances patient care’.

Dr Helen Iredale, GP Partner at Millfield Surgery, said: “I am absolutely delighted that Millfield Surgery has been awarded the Team Excellence award at the annual HYMS awards this year. We were up against some very big hospital departments so I think we can be very rightly proud of such an achievement.

“This is a team award and points to the importance of our entire practice team showing an interest in tomorrow’s GPs coming through the system. The award has been a fantastic boost for the Millfield Team at what has been a very challenging time for everyone.”

Dr Nigels Wells, Clinical Chair at the Vale of York Clinical Commissioning Group, said “Millfield Surgery is a well-established teaching surgery, and has recently expanded their teaching commitment to include both fourth and first year students from HYMS. I would like to congratulate them on their award which recognises the efforts of the whole team at Millfield Surgery to delivering excellent hands-on experience and instruction to medical students who are the future of our NHS.”